I'm takin to you. 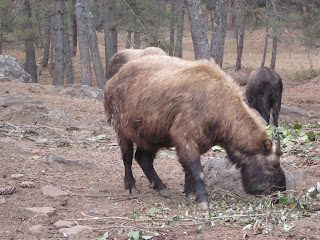 If you've been to Bhutan and seen the national animal, this tired joke will make sense. Otherwise, you read it first here. Bhutan's national mammal is the Takin. That's Budorcas taxicolor to a biologist, but I'll stick with takin. It's a high altitude hoofed mammal, sort of cow like in general form. The story Bhutanese learn as kids and visitors learn from their guides is that the irrepressible saint, Lama Drukpa Lama Kinley, affectionately called the Divine Madman asked to be served an entire cow and a goat to eat. He ate them both (the story does omit how one man ate an entire goat and cow, but strange wonderful things seem to happen in Bhutan, so bear with me). When only the bones remained, the locals asked for a miracle and Drukpa Kinley placed the goats skull on the cows body, snapped his fingers and the animal that came to life was the takin. Divine creation, Bhutanese style.

Bhutanese who are very adept in English fail to laugh when foreigners gaze upon takins and say, "hey man, what you takin about", or any of the other phrases the beast engenders. Maybe they understand, just think our sense of humor too pedestrian. But I tell you, sophisticated adults from the USA always attempt these bits of wit in the presence of takins. 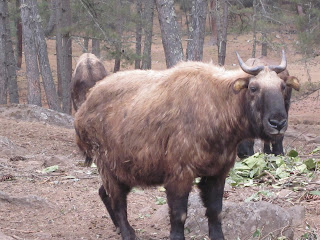 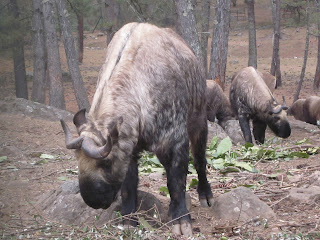 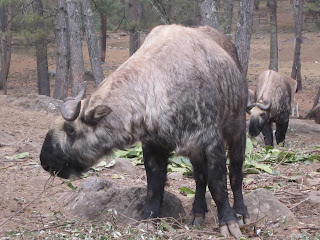 You can see takin if you go trekking in Bhutan, but they are rare and shy and inhabit remote areas. So most people see them in the Takin Reserve above the capital of Thimpu, Bhutan's largest settlement with 80,000 people. Some 20 years ago several takin were brought here, along with a few other native animals to a zoo. The king later decided that keeping captive animals was not in line with Buddhist teachings, so requested they be released. The freed takins wandered into Thimpu (the zoo was in the hills above Thimpu) where they found easy pickings in local gardens. It was decided these takin were too habituated to humans, so they were recaptured and housed in a multi-acre enclosure called the Motithang Takin Reserve. Here they are breeding and looked after by their keepers and biologists, and can be seen daily by visitors. It's a popular spot for both Bhutanese and tourists, as it provides the visitors with another 'only in Bhutan sight' and story.
Posted by John at 4:38 PM