YOUR NAME IN BHUTAN

All Bhutanese have 2 names, so far this sounds pretty standard. But not surprisingly it's not. We Westerners are familiar with the concept of 2 names, first and last names, names for women and for men.

In Bhutan everyone has 2 names, though not first and surname, simply 2 names. It's a country without family names. There's a  limited number of Bhutanese names, and every one of them can be first name, second name, man's name or woman's name. Easy or complicated? Well, a bit of both. Parents do not name their children. After the birth they wait for an auspicious day when they take the child to a monk who them blesses the child and chooses the names. Which means there's no shelf in the bookstores with 'what to name your child' books.

To the US way of thinking this is terrible, the parent has no choice in what to name the kid. But remember that many cultures also arrange their children's marriage, another lack of choice that makes people in the US shudder, yet in countries where this is the practice, most are onboard with it, and it seems to work. Bhutanese by the way, do marry for love (with some exceptions). They do not seem to mind a lama or monk choosing a name, and will wait some time, or travel long distances so as to have a powerful lama choose a powerful name, a name they believe will protect the child. I have friends who told me when they were young they were sickly, and their parents took them a more powerful lama to be renamed, and continue the story by saying they've seldom been sick since. Some parents shop around for names more to their liking, if the first names given are not to their liking. While I suspect this would not have occurred a generation ago, this name shopping does not raise eyebrows.

Bhutanese names are mostly 2 syllables, easy for English speakers to pronounce and pleasant sounding to our ears. With relatively few names you hear them over and over and quickly get the hang of them. Common names: Dorji, Tshering, Jigme, Pema, Tashi, Lobsang, Sangay, Tshentso, Wangchen, Chukie, Sonam, Nawang. Dorji is perhaps the most common name, it means Thunderbolt, which seems a pretty sexy name to me. The lack of family names means a persons history is not carried in the name It also means that men do not 'own' women in the Western sense, where women relinquish family names to become the property of the husband. It also means that when someone shouts "Sangay" a bunch of men and women will look to see who called for them. 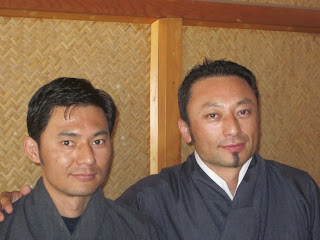 Like all rules, there are exceptions. The Royal Family does have a family name, Wangchuck. A handful of names apply only to boys or girls. And some Bhutanese of Nepali origin have Nepali names (though many have the typical Bhutanese names). And a few people have western nicknames. But mostly as you travel in Bhutan you encounter over and over the same melodious names, shared by siblings and people of opposite sex. In a pleasant way, it reinforces that in Bhutan, things are unlike elsewhere.

Pictured: 2 brothers, Dorji and Dorji.
Posted by John at 1:12 PM